Jun/Jul 2022. Best Desktops. On Birdymanbestreviews we review good, affordable Apple, Windows, family, college, gaming and work/business desktops. We look at specs like a quad-core or even a octa-core processor (for example: Intel I5, I7, I9 or AMD A8 or A10 etc), fast hard-drives SSD and/or HDD with plenty of storage and DDR4 RAM. Also important for gaming and heavy duty graphic programs are reliable sound and graphics cards so that they can run smoothly, as well as playing HD movies.

On this website you will first find my recommendation for the best (tower and All-in-One) desktops and then my choices for the best Intel i3, i5, AMD and gaming PC.

The best Desktop for the money at the moment is in my opinion the Acer Aspire Desktop, with 10th Gen Intel Core i5-10400.

It has the combination of the 10th Generation power efficient Intel i5 10400 processor together with the newest very fast 12Gb DDR4 Memory. Although not the latest Intel version it has at this time a very good price/quality because the 11 and 12th gen Intel processors are much more more expensive with only average gain in performance. A big increase in performance of the Intel Core series is expected in the next 13th gen processors. The Intel I5-10400 has a Turbo Boost up to 4.3 GHz and the RAM runs at 2666Mhz. DDR4 is in today’s new desktops a must and 12 Gb RAM is more than enough for any demanding graphics program or game at average settings. When you want to play more demanding games or at a higher setting then you probably want to install a separate graphics card or buy a gaming desktop. The RAM is up-gradable to 32 Gb if needed. The very reliable and tested i5 processor has integrated Intel 630 UHD graphics which delivers good performance for everyday use. OS: Windows 10. It has a 512 Gb SSD which gives a fast boot and gives you more than enough storage space for all your data. It comes with a keyboard and mouse.

Price/Quality
Price (at time of writing this post): around $580 but this could have changed in the meantime. When I look at price-quality and value for money this ACER tower desktop is still my choice for ‘best desktop 2022’. It is also one of the best selling desktops on Amazon at the time of writing. 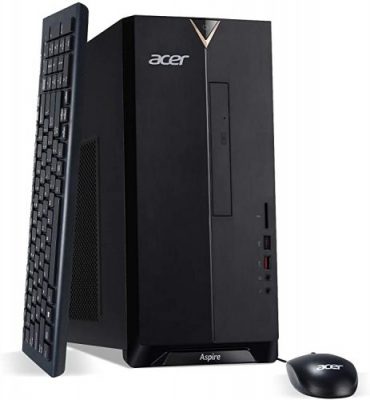 The best All-in-One desktop today in my opinion is the easy to use Acer Aspire Z24-890-UA91 AIO Desktop. It has a 23.8 inch Full HD (1920 x 1080) widescreen Edge to Edge LED Back lit Display, the newest 9th Generation Intel Core i5 9400T Processor (Up to 3.4GHz) and incredibly fast 12GB DDR4 Memory. This new Intel I5 processor combined with the 12 Gb DDR4 RAM makes and the 512 Gb SSD make this a desktop to be reckoned with. It responds very fast and can handle multi tasking and gaming on average settings easily. The 512 Gb SSD Boot is fast and reliable and has plenty of space for your movie/music collection. Because of the high quality specs and the integrated screen this all in one desktop is more expensive than a stand alone desktop. 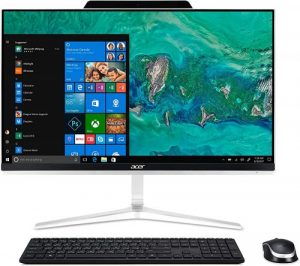 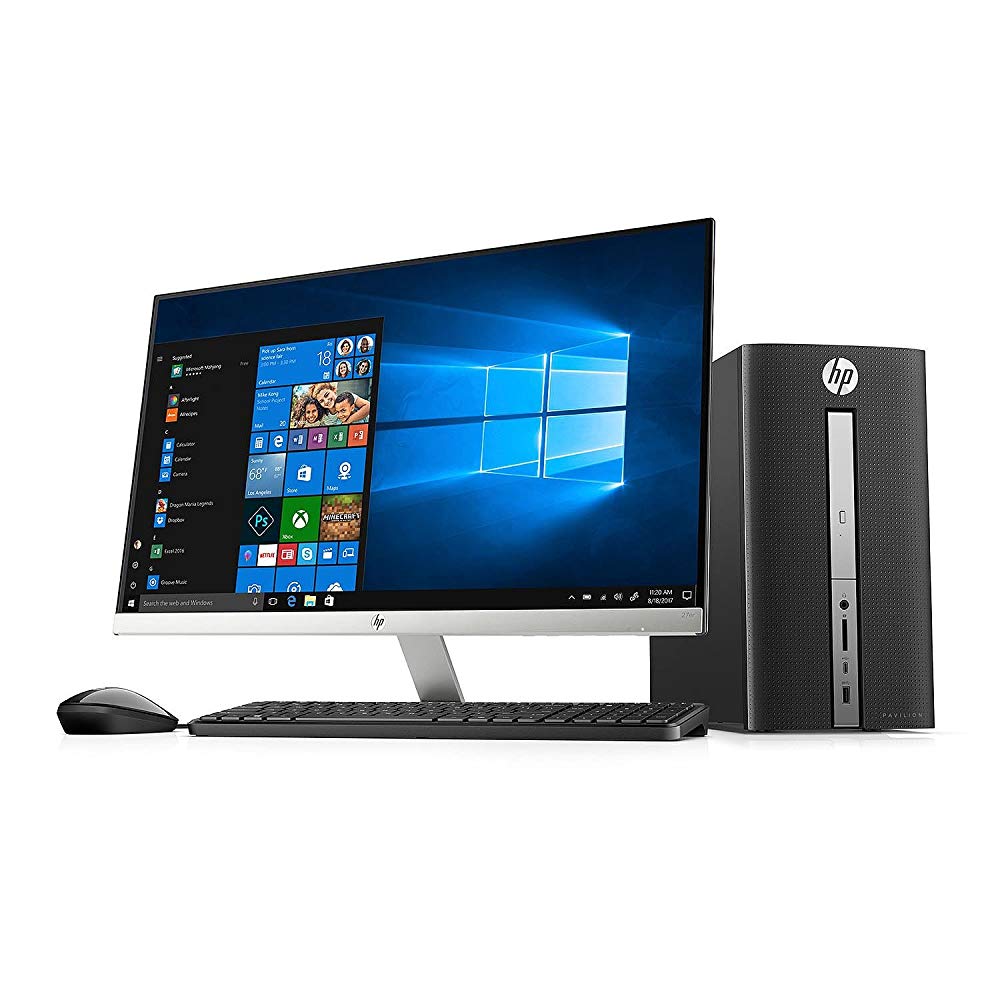 The 2nd best AiO desktop today is the Newest Flagship Dell Inspiron 23.8″ All-in-One Full HD Touchscreen Anti-glare Desktop. It has the latest Intel Intel i5-10210U processor with Intel Integrated UHD Graphics. This processor can handle multitasking and medium heavy graphics programs/games/movies in Ultra HD running in the Windows 10 OS easily. The 8 GB DDR4 RAM in combination with the 256 GB SSD makes this a desktop that boots and responds very fast. It also includes integrated/built-in stereo speakers tuned with Waves MaxxAudio solution for excellent sound and a wireless keyboard and mouse.

I have chosen this Dell AiO desktop to be the 2nd best AiO desktop mainly because of the price/quality. Dell is a respected manufacturer of quality desktops. For this price a desktop with these specs, including a Dell 23.8 inch Full HD touchscreen monitor is a very very good deal! You get the whole package with everything you need to start right away. For that reason this desktop is also one of the best selling All-in-One desktops for family, college and work/business. 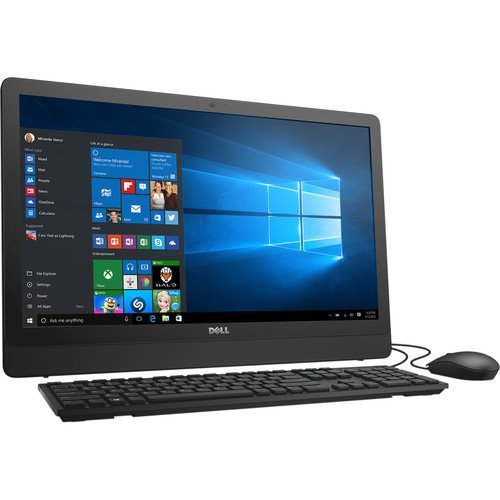 Dell Inspiron All in One Desktop

Here are some recommendations for a good keyboard and mouse that you need for your new desktop.

(Click on the thumbnails for more info, specs and buy)

Gaming desktops are high-end desktops and are more expensive than normal desktops. This is because they have a better cpu, more/ faster RAM and a much better video card than regular desktops, which are needed for fast game-play, high fps and excellent graphics in high demanding games.

When you just want a pc to do some everyday email, internet/ social media, watch an occasional movie or do some text editing then, a cheaper, more affordable budget computer is the best choice. The specs are not as good as the more expensive desktops have. So therefore don`t expect the fastest performance. If speed and specs are not the most important then the following recommendations are everything you need. And all that for a good price. Also check out the refurbished desktops which are good value for money.

What specs do you need in a desktop computer?

Speed is a very important spec. The speed of a desktop is mainly dependent on the quality of the central processing unit (CPU), how many CPU`s (single core, dual core, quad core), the available RAM (more internal memory is better, today desktops should have at least 4 GB) and the harddisk (SSD is much faster than regular HDD). You almost don’t see single core cpu’s anymore these days. 2 or 4 cores is common with 6 to 8 cores for the more expencive and gaming pcs. When running programs or games that use a lot of graphic processing the quality of the graphics processing unit (GPU) and/or video-card is very important.The newest Intel i3/i5/i7 cpu’s are the 10th and 11th gen cpu’s that perform better and use less power.

When choosing a PC the CPU is an important factor to consider. The CPU is the heart of the system. There are two main processor manufacturers namely Intel and AMD. The intel processors tend to perform slightly better per core but costs about twice as much compared to the AMD processors. The advantage in performance can be noticed in high speed gaming frame rate but is hardly noticeable when using the desktop for normal use. The newest Intel CPUs are the 10th and 11th generation. AMD processors get more out of a good GPU and RAM running on a high frequency.Therefore you mostly see AMD processors in gaming rigs.

The Need For Speed

In 2021 all new desktops have the new fast DDR4 RAM which is faster and more power efficient than the older/slower DDR3. When deciding on a new desktop I suggest you definitely buy one with DDR4 RAM.

Desktop computers are available in two varieties: tower desktops and all-in-one desktops. A tower desktop usually does not include a monitor. You will need to buy one separately which adds to the total price, or use one that you already have. In an All-in-One desktop the computer components are build in in the monitor. This makes All-in-One desktops generally more expensive than a tower desktop without monitor. An AiO desktop saves space but it is more difficult to build in extra components if you want to do that. Also, you are stuck with the integrated screen and can not replace it with a new monitor later on. There are advantages and disadvantaged for both choices.